Flexible Workspace vs. Dedicated Office: Which One Is Right For You?

Work and the nature of where and how it’s done has changed a lot in recent decades.

Where once an employee toiled in a factory or managed files in a cubicle; the rise of portable computers, high-speed internet, and creative knowledge work has allowed many jobs to be done in any number of different locations.

Accordingly, employers are beginning to offer flexible accommodations while trying to balance productivity with happiness and personal fulfillment.

It’s a fine line, which is why today we’re going to explore the pros and cons of increasingly popular flexible, collaborative workspaces as well as why traditional, dedicated workspaces still have their place—and how to strike the best balance for your business.

We’re all pretty familiar with what a dedicated workspace is. Traditionally, it’s an office space that a business owns or rents long-term where workers have their own designated areas to which they’re expected to show up and do their jobs most days.

On the flipside, flexible workspaces are typically owned by a coworking company from which a business rents offices or open space on a short-term basis. Where the same people might occupy the same desks for years in traditional, dedicated office spaces; flexible workspaces often see workers and entire businesses moving around.

Generally, there are four types of spaces at flexible coworking offices:

In a June 2019 “All Things Considered” segment for NPR, host Audie Cornish suggested that 30 percent of Americans will work from flexible spaces in the next decade.

But it might take a little longer than that to get there. Commercial real estate giant CBRE notes that 70 percent of flexible office space is concentrated in the nation’s 10 largest markets and that flexible space still only accounts for 2 percent of total office inventory. 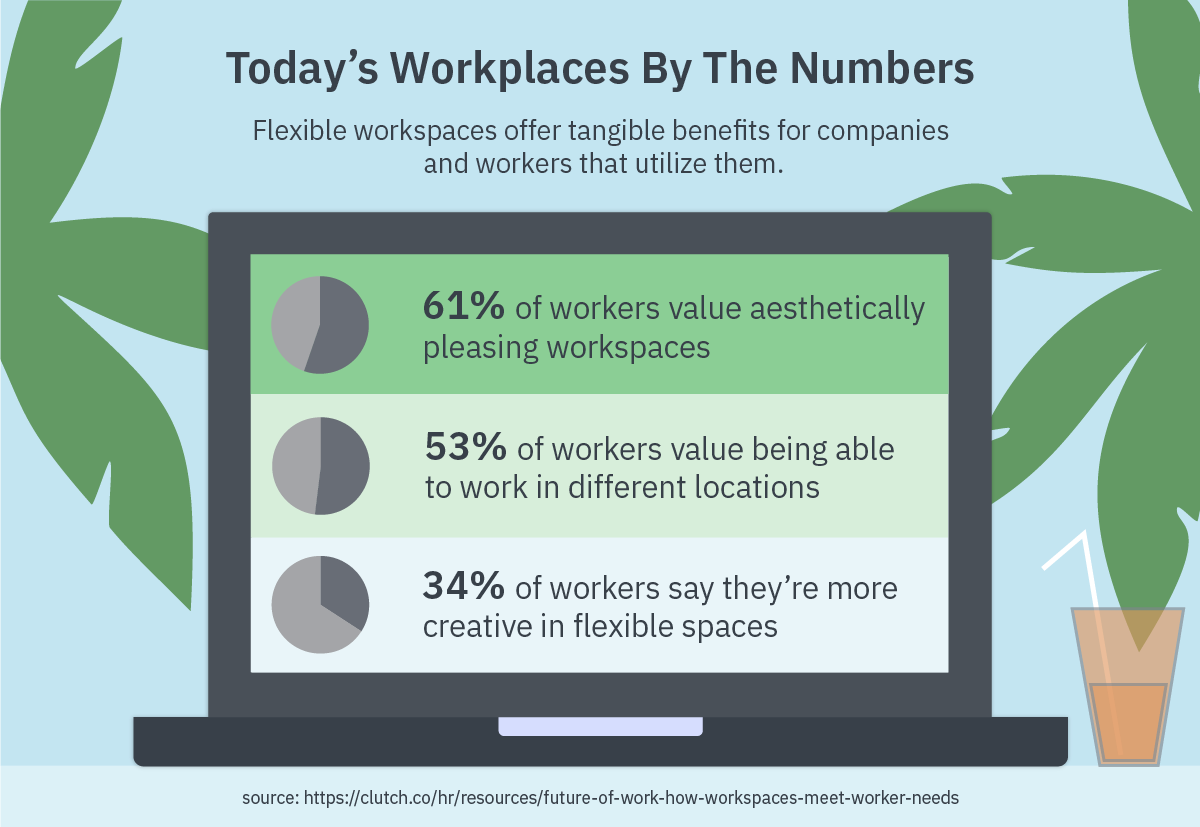 One thing’s for sure: In certain respects, it’s gotten much tougher for businesses.

Where companies of 30 or 40 years past could get away with tacky wooden furniture and building designs that looked straight out of the Soviet Union, offices in 2019 have to impress or lose potential workers. In a recent study, 61 percent of workers said they valued an aesthetically-pleasing workspace.

While it’s easier to manage a certain aesthetic in a permanent office space, businesses can also seek it out from coworking companies.

It’s easy to deduce why this may be. Flexible workspaces let employees work when and where they’re comfortable, giving them autonomy and trusting them to complete tasks.

Harvard Business Review was already observing the trend toward flexibility at a company called Telenor back in 2014: “Telenor’s open, public, and flexible space values exploration much more than engagement—it begs employees to meet in the open, where they may bump into unexpected people, and allows them to claim spaces and shape them for brainstorming sessions.”

The Cost of Ignoring Flexibility

Somehow, though, many companies even in 2019 still don’t get it.

They force their workers to adhere to strict Industrial Revolution-esque schedules. Forget telecommuting or remote working—these places have no interest in allowing even the most modest of innovations. It’s eight hours a day at the same time, at the same place.

There’s undoubtedly a cost, both for inflexible companies and the good employees they alienate. One management consultant, a top seller for his firm, said he was passed over for promotions because he left work every evening to care for his children.

“It’s not that I wasn’t working,” the consultant said. “I always put in an extra two or three hours after the kids went to bed. But I was told that my lack of presence signaled a lack of commitment to the firm.”

Obviously, some degree of flexibility should be embraced by every workplace to avoid the above situation—but are full-on collaborative offices truly the only way forward?

The Pros and Cons of Flexible Workspaces

The benefits of flexible workspaces have become increasingly well-known in recent years, with coworking an increasingly popular trend even among Fortune 500 companies.

That said, there are a few downsides, as well. Here are both the pros and cons of going all-in on flexible workspaces.

Unconventional, flexible workspaces signal that a company is willing to adapt to the times and encourages employees to exchange of knowledge—all while remaining conscious of space utilization.

An Environment That Encourages the Exchange of Knowledge

When workers are segmented off into cubicles and individual offices, chances for collaboration and the kind of one-off, creative conversations that can happen in a good office diminish.

However, these random exchanges of knowledge happen often in flexible coworking spaces, where members expect it.

Of course, traditional office-based companies can adapt this spirit, too—but they have to work to foster it.

Quickly Take Advantage of Both Design and Freedom

As we explored above, businesses of today must provide seemingly contradictory things: A carefully-planned, aesthetically-pleasing office that also caters to workers who want to move about it in unplanned ways.

If it’s too difficult to make over an existing office to fit these requirements, one of the greatest things about flexible coworking spaces is that it provides an immediate solution.

Whether because of travel, vacation time, or sick leave; it’s almost inevitable that some space in a dedicated office will go underutilized from time to time.

By allowing businesses and employees to select a rental agreement—often monthly—that fits their schedule, flexible workspaces can eliminate costly underutilization. 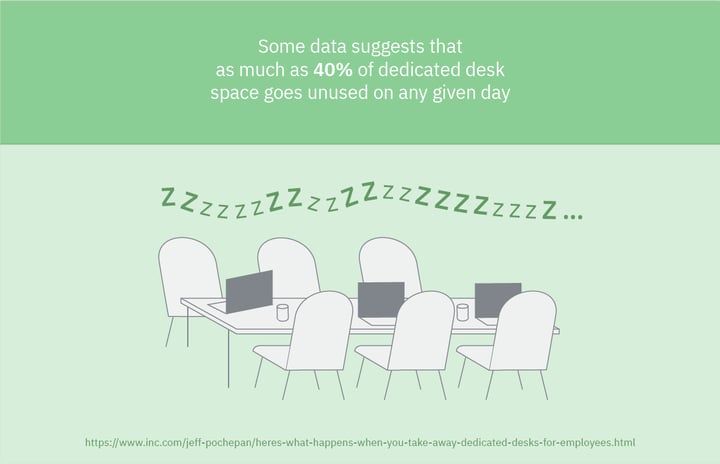 Unfortunately, this very commitment to flexibility can lead to some big downsides that are unique to coworking spaces.

The Downside of Flexible Workspace

Flexible spaces can be distracting, hard to manage effectively, and, most worryingly, here one day and gone the next.

Having All Your Eggs in One Precarious Basket

In 2019, WeWork filed to withdraw its initial public offering (IPO) when “investor skepticism” and financially losses forced it to consider a valuation of $10 billion following a $47 billion valuation in January of the same year.

Whether it’s WeWork or another provider, companies that choose to base their businesses in coworking spaces long-term must accept that they’re aligning their success with that of the coworking space—for better or for worse.

Because of that “knowledge exchange” culture that we mentioned earlier, coworking spaces can actually make it harder to get deep work done between excessive noise and unplanned (read: unwelcomed) desk visits.

One of the biggest business challenges of a flexible workspace may be office administration.

When workers are distributed and coming in and out all all times of the day, it can be hard to get everyone together for important trainings or to fill out new paperwork. Sometimes, it’s just easier having all workers under one roof.

Lack of Routine and Personal Space

The lack of personal space and routine that comes with flexible coworking spaces can actually be uncomfortable for employees. Imagining starting each day hunting for a desk because traffic on your commute made you 10 minutes late.

And forget about leaving any personal touches—or even your laptop charger—at your desk overnight if you aren’t planning at clocking in at 5 a.m. to make sure someone else doesn’t snag that nice spot by the window.

Does increased flexibility make up for the time and stress employees are exerting every day just to find somewhere they can work comfortably?

The Pros and Cons of Traditional Offices and Dedicated Workspaces

With over 95 percent of office space still traditional in America, they have to be doing a few things right.

Here are the major upsides—and downsides—of the alternatives to flexible coworking spaces.

When some people think of the traditional office, they think of outlandish real estate rates and ugly, old furniture. Unfortunately, they’re too often right about these main downsides of dedicated office space.

When a company rents a traditional office space, it makes a commitment.

Often, that commitment means a ten-year lease at thousands of dollars each month. It can also mean paying for regular cleaning, maintenance, lawn care, and managerial staff to keep the office looking nice.

You May Need to Remodel to Stay Modern

Modern workspaces should have a mix of open and private work areas, intimate meeting spaces, and sound-proof booths for phone calls or extra-focused work.

Traditional offices aren’t all expensive rent and remodeling fees—there are quite a few benefits that come along with dedicated office space.

Research shows that employees don’t actually switch between different work settings that often. And while employees who like to switch between workspaces are more satisfied when they have the option to do so, those who don’t desire this kind of flexibility are decidedly unhappy when it’s forced upon them.

Dedicated office space means that workers will never have to fight over shared coworking space. It means they’ll never have to worry if they’ll be able to find privacy or settle down and concentrate on any given day. It means that when they come in each morning, their desk and their photos of their kids will be as they left it the previous workday. And the stability that instills is invaluable.

A traditional offices can give employees productivity-enhancing structure that’s hard to find in the modern world.

Sure, their work schedules and personal lives may be hectic; but a dependable, dedicated office space is often just what employees needs to shut the world off and get to work.

Getting workers around one another consistently generates stronger team culture, improved communication and productivity, and through-the-roof creativity.

Dedicated Office Spaces can be Tailored to Impress Clients

Another benefit of keeping a traditional office space, as one office provider noted, is a chance to dazzle anyone who visits:

“A private office space allows you to invite guests into your own office, instead of ushering visitors past other coworkers to a rented conference room. Having an office space to call your own is impressive.”

In addition, a customer who visits a business at coworking space might not be impressed by the flexibility and instead assume the company isn’t large enough to meet its needs.

Businesses want to convey power and that they have the wherewithal to stand the test of time.

Having a fixed, well-designed office is a great way to express to anyone whom you do business with that you aren’t going anywhere.

Which Workspace is Right for You?

When creating or updating your company’s workspace, the first thing to know is that there isn’t a right or wrong way to do it—and, change is generally possible.

The key to determining whether a fixed or flexible workspace is best for you lies in what’s right for your company today and what kind of culture you wish to cultivate for workers and clients. From there, it’s a matter of weighing the costs against the benefits.

Companies can make use of both coworking spaces and traditional offices in a variety of ways—such as having a fixed home base for the majority of employees and flexible arrangements for remote workers. In addition, businesses that already own office space can make modern updates that welcome flexibility while cutting expenses with office management technology that mitigates overhead.

Whatever balance you strike with your business, remember that “flexible” and “dedicated” don’t have to be mutually exclusive when it comes to office space.

Ghost Meetings Are Haunting Your Office (And Financials)

Infographic: Millennials vs. Gen Z in The Workplace

For years, Millenials have been the butt of the joke—the slackers and the entitled basement-dwellers.
Start Reading
Tina Eaton 12/10/19 2:00 PM 11 min read

Most people already know they’d want nothing to do with a job at Dunder Mifflin. The fictional paper company from The Office ...
Start Reading