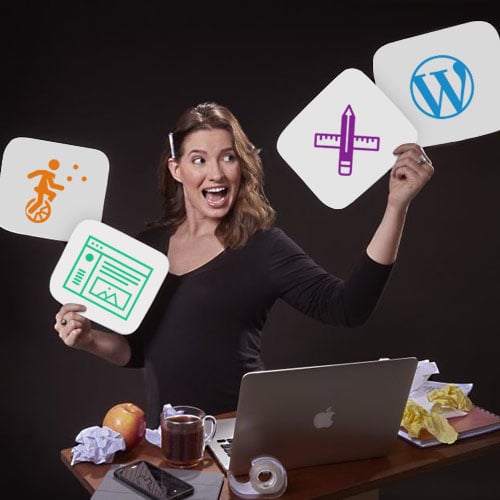 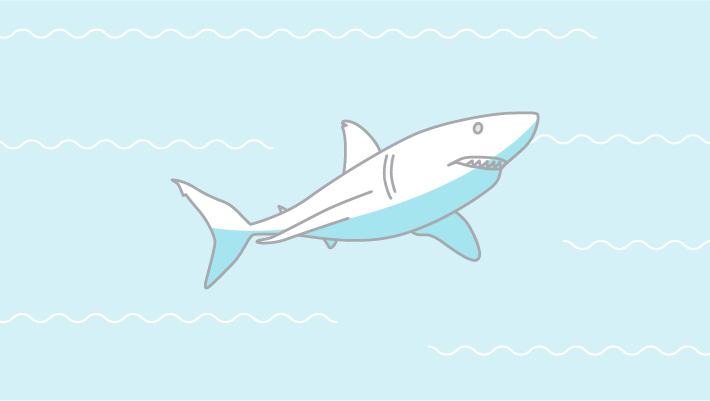 Today, we’re going to explore what room sharks are, how they’re costing businesses large and small big time, and the single piece of software you should invest in so you can bite back before being dragged under.

Grab your oxygen, it’s time to dive in.

What Are Room Sharks?

They move swiftly from meeting space to meeting space—biting big chunks of time and productivity out of their coworkers’ days.

Who are these workplace predators?

All Jaws flashbacks aside, “room shark” is a term we coined to describe a person who decides to use a meeting space without checking whether or not it’s already been reserved. Room sharking is often not done maliciously—it’s just an unfortunate side effect of a non-existent (or just poorly-organized) booking system when it comes to meeting spaces.

However, whether done accidentally or on purpose, room sharking has notable consequences for enterprise businesses.

Room sharking, and other results of poorly-managed meeting spaces, cause more than the occasional, silly little “scheduling hiccup.”

In reality, interruptions like this have serious implications that cost businesses plenty more than just a little wasted time now and then.

Businesses spend a lot on the spaces in which they choose to work. In fact, according to startup founder and funder Mark Suster, space accounts for as much as 20 percent of an organization’s total spending—second only to employee salaries.

And, unlike many costs, an investment in meeting space isn’t one you want to cut. Lack of appropriate meeting space can hinder productivity and squash business opportunities by limiting your staff’s ability to host focused discussions.

With rudimentary meeting management tools—or a lack thereof—it’s easy to incorrectly (and expensively) assume that your investment in space is being returned and that it will need to grow as your team does.

But do the facts line up with that assumption?

Gartner estimates that each employee spends 27 hours per year just looking for available meeting space. And as we’ve just learned, it’s unlikely that they’re having trouble because there’s actually a lack of space. Rather, there’s a lack of meeting management software to help them find and secure the right space.

Room sharks appear in work environments that lack appropriate meeting management tools. They go around snapping up private meeting spaces that they’re unaware have already been claimed. Their presence can make it seem like your meeting spaces are busting and the seams and it’s time to expand your real estate investment.

Instead, businesses can put part of that investment toward meeting management software that helps them understand and maximize their meeting space usage—and put the rest toward profit.

You’ve just spent your morning putting the finishing touches on a presentation that’s taken months to pull together.

You’re confidently reaching to open the door to the conference room where you’ve already had pastries delivered and the right number of chairs set out when you hear...what’s that...Gus on an obnoxiously loud sales call?!

As you see your client’s top brass marching down the hall toward you, it’s time to make a snap decision—barge in on Gus’ closing pitch or cram your meeting attendees into another space and hope you don’t become the room shark this time.

While the details may be different, it’s almost guaranteed that a very similar scenario has happened in your workplace.

Whether it’s the result of a “more important” meeting, inconsiderate rooms sharks, or an insufficient meeting management system—getting bumped from you planned meeting space sucks.

And the more it happens, the bigger the detrimental impact it can have across your entire organization. Having to reschedule or rearrange meetings on the fly doesn’t just waste resources—it can lead to resentment between workers or teams, rumors of favoritism, refusal to collaborate, and other negative feelings and behavior that add up to a toxic work environment.

And just imagine how frustrating it is for the clients who have come all the way to your location for an “important meeting” just to realize they’ve been downgraded to an empty office by a single room shark with a mouth full of pastries that they were promised!

Have this scenario play out often enough and you won’t just be losing one opportunity but plenty of future ones thanks to a poor business reputation. 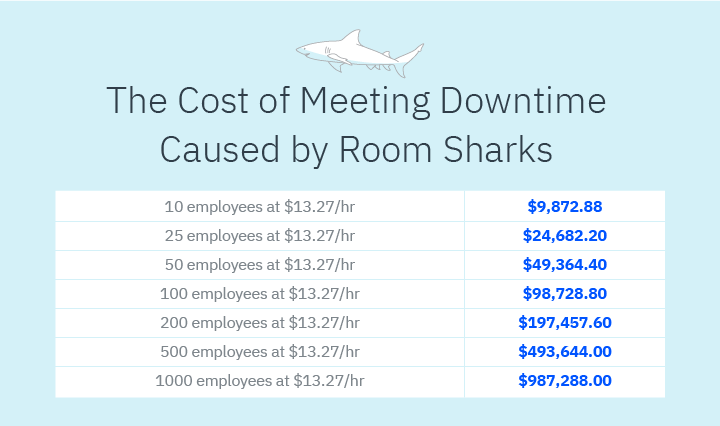 In one study of office workers, a whopping 70 percent called their meeting management system “woefully inadequate.”

However, the most productivity-plummeting part of the process came after the meeting space was finally found and secured: More than 71 percent of survey respondents said they’d had to ask colleagues to leave their already-booked meetings space more than three times a week!

Let’s do the math to see just how much late starts caused by room sharks are costing companies.

First, it’s important to know that the average employee in the U.S. attends 62 meetings per month.

And in a study of over 1,000 office workers, it was determined that the average meeting begins six minutes late. That’s 6.2 wasted hours per month or 74.4 per year—per employee.

Have 50 employees? If they're making about as much as the average U.S. office worker at $13.27 per hour, you’re shelling out almost $50K every single year on wasted time in meetings.

More than 50 employees? Well, you can do the math—but you won’t want to.

Across the U.S., the salary cost of unnecessary meetings is estimated to be $37 billion.

When the majority of meeting hosts are wasting several minutes asking room sharks to relocation several times every week—it’s pretty easy to see that they’re a major driver of extremely costly meeting downtime.

Thankfully, you don’t have to sit back and let it happen.

The Solution: Every Business Needs an Effective Way to Manage Meeting Spaces

It’s time to bite back against room sharks.

For too long, poorly-managed meeting spaces have led to the rise of room sharks whom, in turn, have cost businesses big time when it comes to real estate investments, irreparable harm to culture and reputation, and unproductive downtime.

Today, businesses can shut down sharks and drive a harpoon through the nasty consequences they cause with digital meeting management software that makes it easy to find and book spaces, seamlessly order all the right supplies, usher visitors to the right spot, capture actionable insights, and everything else it takes to host productive gatherings.