Most people already know they’d want nothing to do with a job at Dunder Mifflin.

The fictional paper company from The Office was a poorly managed cubicle farm in a failing industry. The employees ranged from simply disgruntled to downright incompetent to physically, mentally, and emotionally scarring — both for their fellow Dunder Mifflinites and for viewers, who found that the cringe-worthy cast made for an entertaining sitcom, but would be absolute torture to work with in the real world.

And in addition to its myriad problems, Dunder Mifflin had office security policies that would be horrifying in any real office environment (not to mention crazy dangerous). Let’s take a look at some of the biggest office security threats and security best practices — and how, in the world of The Office, none of them seemed to matter.

We’ve written before about the three biggest security risks that the average office faces: Theft, violence, and emergencies. During The Office’s nine seasons, the staff of Dunder Mifflin faced them all — and never handled them well.

According to Statistics Brain, employee theft is one of the biggest risks offices face — and it’s costing them $50 billion a year in the U.S. alone. Office theft can look like a lot of different things: Employees stealing anything from office supplies to major technology, or things like fraud and embezzling.

At Dunder Mifflin, we see this happening pretty early on: during Season 3, in “Branch Closing.” Worried that the Scranton branch of the company is about to close down, Creed Bratton gets a last-minute payday by selling off all the office equipment around his desk.

But office theft doesn’t always look like this. Rather than taking physical objects, employees can steal intellectual property, too — something that costs U.S. business between $225 billion and $600 billion each year, according to The Commission on the Theft of American Intellectual Property. Dunder Mifflin wasn’t immune from this, either; remember in Season 5 when Michael left the company to start his own paper sales team? Dwight, still loyal to his old boss, stole company files to hand off to the newly formed Michael Scott Paper Company.

No matter the lengths they go to to foster a safe environment, no office is completely immune from violence. 2 million people a year report being the victims of some sort of office violence, and nearly every Dunder Mifflin employee would have been part of this statistic at some point during their tenure.

During Season 7’s “Classy Christmas Party,” we see a snowball fight between Dwight and Jim escalate over two episodes, reaching the point where a brutal and icy ambush leaves Jim with a bloody nose.

This is one of the few times someone in a position of authority steps in after staff members behave badly on The Office. Interim Human Resources Manager Holly Flax (a temporary fixture at Dunder Mifflin and one of the only sane people ever to grace the Scranton branch) tells Dwight and Jim to knock it off — not that they actually do.

Having someone step in isn’t quite the norm for office violence at Dunder Mifflin, though. Remember in Season 2 when a humiliated Michael tried to prove his manliness by challenging Dwight to a physical fight?

Not only was no one trying to stop this from happening, but one of the people involved in the fight was Michael, the branch manager. Not exactly the example a boss should be setting for his team, but then again, is anyone surprised in Michael’s case?

And let’s not even talk about Dwight, who had a hidden stash of dangerous weapons all over the office until Toby finally confiscated (most of) them in Season 3.

A prime example of this is in Season 5, when Stanley has a heart attack in the office. A medical emergency at the office isn’t something anyone can predict or prevent, but what you do once an emergency is occurring is what matters.

In this case, Michael tried to give Stanley mouth-to-mouth (not an effective treatment for a heart attack), and no one called 911, which is what they should have done first. In fact, all the other Dunder Mifflin employees gathered around and watched, while no one called emergency personnel who could actually help.

It’s no wonder no one thought to call for help for Stanley, though, after the last office “emergency” they had. Back in Season 3, Michael tried to teach an office safety lesson by going onto the roof of the office building and pretending to be depressed and suicidal. It was pretty clear to everyone in the office that he was just putting on a show, so no one called emergency services.

Oof. Dunder Mifflin: Not a safe place to work. But it gets even worse. Those are the ways The Office failed to address the biggest office security threats in real-life offices, but when it comes to safety procedure best practices, the Scranton crew failed some more.

How Offices Should Foster Security — And How Dunder Mifflin Didn’t

At the end of the day, there are a lot of office security threats you can’t predict or prevent. All you can do is have good policies and procedures in place to respond when a dangerous situation does arise.

Surprise! The Dunder Mifflin crew didn’t do that.

One of the best things a company can do to keep its office safe is conduct regular training and safety drills to make sure employees know exactly what to do in case of an emergency. And while we can’t say that Dunder Mifflin never ran training or drills, we can say with a fair amount of certainty that none of the safety training the Scranton branch received was effective.

Just take a look at the “fire drill” Dwight runs in Season 5 — by setting an actual fire in the office and locking everyone in.

Honestly, it’s a good thing the show was a comedy, or someone probably would have actually died in that scenario.

Sure, there were other safety trainings done at Dunder Mifflin. In an interview, Darryl once explained that he provides warehouse safety training to the entire team at least once per year. But that never stopped Michael from taking the heavy machinery for joyrides.

Have a Visitor Management System In Place

Considering everything that constantly went wrong at Dunder Mifflin, you’d expect the staff there to at least practice good office security in one way that should have been relatively simple for them: By managing visitors to the office. The building had a gated parking lot and Hank the security guard on-site all day. And yet, it seems like anyone could come in off the street and waltz on into the Dunder Mifflin Scranton branch without so much as signing in.

A bad example for visitor management was set right away in Season 1, when Michael allowed Katy the purse saleswoman to set up shop in the office conference room. There was no reason for this stranger to be allowed to set up a sales space in a paper company office, except that Michael wanted to score a date with her. Not exactly the greatest reason to put office security at risk.

With that example set, it should have come as no surprise later, in Season 3, when Roy, a warehouse worker who doesn’t need access to the office, is allowed to walk right in and attack Jim.

Seeing all these examples, there’s really only one conclusion you can come to: Dunder Mifflin’s office security policies (when they even existed) were trash. They weren’t keeping those employees safe, which makes for exciting TV, but just wouldn’t fly in the real world.

So don’t follow Dunder Mifflin’s example at your IRL office. Instead, protect your office from these and other security threats by doing the things Dunder Mifflin didn’t do, like having clear safety and security procedures in place and practicing them. After all, a strong sense of security is an important building block for employee engagement and productivity, which may also explain a lot about Dunder Mifflin.

In a modern work environment, you need office technology that takes safety and security (both physical and digital) into consideration. Creating a secure work environment is the first step to making sure your office is nothing like The Office, and your employees will thank you for it. 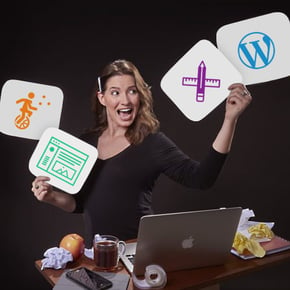 How often has this happened to you? You spent all weekend prepping for a presentation to your boss' boss. You are hyped. You’re ...
Start Reading
Tina Eaton 10/15/19 2:00 PM 2 min read

Infographic: Millennials vs. Gen Z in The Workplace

For years, Millenials have been the butt of the joke—the slackers and the entitled basement-dwellers.
Start Reading
Tina Eaton 1/28/20 2:00 PM 19 min read

The Office Efficiency Handbook: 30 Timewasters to Eliminate in 2020

It’s no secret that basically no one goes to the office and stays perfectly on task for eight straight hours, five days a week. ...
Start Reading